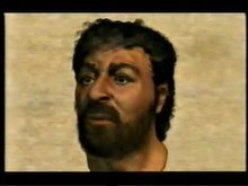 The whole Jesus story comes to us from other people, not directly from him. We know that the gospels aren't dictation; he didn't write anything down. 'Christianity' as we know it all came from others later: first from Paul (especially in his letter to the Romans); then from the 'synoptic' Gospels (though they contain very little that Paul would recognise) and then from John and the Early Church 'Fathers' and beyond. This is where 'Christianity' comes from, some it over more than 300 years after Jesus.

But what if Paul (always a Jew, as Jesus was) and then Augustine and all the rest were mainly dealing with their own guilt, fear of imminent judgement and need for forgiveness, so that's what the story became? According to Acts, Paul, who thought the end times were near, was at least complicit in the murder of Stephen. He says himself that he was 'zealous' in his persecution of the Jesus movement; who knows what else he was involved in that he doesn't mention? He already saw himself as being punished by his God 'in the flesh'. Augustine, and many more like him later, seems to have had a real problem with his promiscuous sex life. This is no basis for the Jesus story today.

What if the need for a means to avoid their own condemnation drove the theology, not actually anything to do with Jesus at all? This desire for a sacrifice to bring about individual atonement seems to have been a major influence throughout Christian history. Then add in powerful men seeking to control the spiritual destiny of others, and you end up with all the doctrines that are still at the heart of conventional faith and worship. This is the religion that most people now see as irrelevant; the kind of religion that Jesus criticised. Perhaps they are right and it is best to let it go, along with its God.

According the three earliest gospels, in contrast to Paul, (who knew little or nothing  about Jesus' life and teaching), Jesus had invited his listeners open their eyes to a new understanding of the here and now. That was the story that they told about him, and why he died, because of his controversial prophetic message. 'Salvation' for 'sin' didn't come into it. But this meant a radical change in their ideas. After his death his friends realised that Jesus had been right; they had seen what they called 'God' in him. But his apparent emphasis on discovering the Kingdom/God-ness on earth is almost entirely missing from the later Creeds and orthodox beliefs.

This should be the focus today not the much later doctrines of the Church. What does it mean to be a compassionate and inclusive human person, as Jesus was? Can we live like he did? What brings us healing and wholeness and expresses our full humanity as he did? That's what interests me and keeps me hanging on, not trying to hold on to a 'religion', with all its flaws, both in the past and now. But much has to be given up if something better is to be found.

I hope that I can still keep a slender hold on my heritage, but this is a personal pilgrimage beyond belief as traditionally understood. The ‘God’ we have created, and the religion Christians have built upon ‘Him’, both strike me as unhelpful. In that sense, I am, and I am sure I will remain, a Non-Theist and a non-'Christian'. The doctrines I am asked to believe do not answer the questions that I and many others are asking. Perhaps they even get in the way and make it more difficult to walk in ‘the Way’ of Jesus.

So can there still be a meaningful conversation about all this?  Is there any point in still bothering? Many would say not, but you are welcome to travel with me for a while. Maybe we can explore these ideas together and discover something new along the way that will encourage us both.

Much more about all this in my books. The journey continues.

There are those who argue that support for Ukraine is misplaced. Of course NATO, including the UK,  has been far from innocent or consistent in its response to other injustices and in its choice of friends. The talk of escalation on both sides is very worrying. Some refugees are clearly more welcome than others. I accept all that. But Putin created this crisis. He has dangerously raised the stakes by his invasion. The suffering he is causing is immense, including clear crimes against civilians. Calls for ''peace"' are meaningless when there is no genuine willingness to draw back. So I stand with Ukraine and its people, but with a sad and heavy heart. Yet there are also many stories of generosity, courage and simple human kindness: these are surely evidence of the 'Kingdom', or as I would put it, the 'God-ness' within and around us.  But a 'God' will not intervene to solve this disaster for us. We can only try to find at least some encouragement in these human signs of hope. And keep Jesus, himself the victim of murder, at the heart of our thinking.

The Jesus story is a 'myth' for our times which, if looked at differently,  can still tell us a deeper truth about life and how to live it well. The Christian 'religion', however, is a set of doctrinal claims based on pre-scientific assumptions that no longer fit with modern knowledge. No wonder most people have rejected it. It may be best to leave a 'God' out of it and move on.

In Study Resources you'll find a PowerPoint (with audio) on 'Who Wrote the Bible'? This is so important and so often ignored. And some Discussion Notes on the classic book from the 1960s, ''Honest to God' which still raises so many key questions that have never been answered.

Friendly Feedback is always very welcome. Please let me know if you have found my ideas interesting.